My name is Áine, I live in Cabinteely and work as an SNA in a local Primary School. I joined Bodyslims in September 2017. I had liked the Bodyslims page on Facebook a good while before I joined and was always so impressed by the weight loss results everyone was getting. I wanted to join but afraid to as I had done so many other weight loss classes, I’d get so far, plateau, get fed up and whatever I’d lost I’d find again and then some more, I hoped this would be different.

I don’t think I ever really believed in myself and losing weight and finding it again became part of the norm. Before my wedding in 2014 I had lost 2 stone through kettlebells, walking and swimming, which I loved and enjoyed but once I stopped, like always, I found 3 stone. I was back, worse than where I started and it was increasing. I’d try again, I have ‘good days’ and ruin them by ‘great weekends’. Self sabotage was nearly a habit.

I knew my weight was getting me down. I didn’t want to go out, Hated getting into photos, clothes shopping always ended in tears especially when it came to dresses. I had gotten to a point where I knew I couldn’t go on like that when I could get past Adele’s second verse of ‘a million years ago’ with out ending up in tears, particularly the line..”sometimes I just feel it’s only me who can’t stand the reflection that they see”. I didn’t like myself and I knew I had to do something.

When I signed up for the September course I didn’t tell anyone, I was afraid that I wouldn’t be able to do it or that this would be like all the rest and I’d fail again but thankfully I was so wrong. I remember being so nervous that first night, and there’s nothing like standing on a scales in front of someone and hearing a crack, thankfully not on the scales but in your heart. I was at my heaviest, despite me trying to be good the few weeks before, living in hope the number wouldn’t be so high. There nothing like fear to make you go on a diet before you actually start a real one. That night I met Jackie. She weighed me in. She was so supportive and encouraging from the very start, I instantly relaxed, still embarrassed by the scales but she told me to take note of the number as I’d never see it again and she was so right.

Gerard’s talks were brilliant, motivational and funny too. He really gets inside your head, explaining everything and helps repair the damage to your belief and confidence weight gain takes away from you. Sharon and all the Bodyslims team are incredible and the support and encouragement they constantly give, even when some weeks aren’t going your way, is amazing.
I’ve done 5 courses now, I don’t lose weight as fast as others but that’s ok. We’re all different but the important thing is that I am losing weight, more weight than I’ve ever lost before and I’m keeping it off. I’m fitter, walking faster than I was, happier in myself and even Adele can’t make me cry anymore. I might not be where I want to be on the scales right now but it’s so far from where I started, I’m so grateful.

Bodyslims has changed my life, my way of thinking, my belief in myself and I’ve made the most wonderful, inspirational friends there too. I can’t thank Gerard, Sharon, Seán, Jackie, Siobhan, Elaine and all the Bodyslims team enough for everything they’ve done for me.
If you believe you can do it, you can change everything. You don’t have to be great to start, you just have to start to be great! 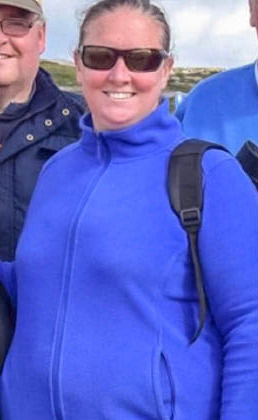 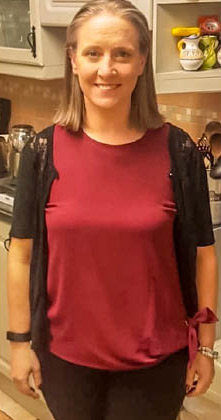