I came across Bodyslims by accident at the moment in my life that I probably needed it most. Battling with my weight for most of my adult life, with one step forward and two steps back I finally arrived at my 50th birthday in the lockdown summer of 2020 barely able to put one foot in front of another. This was a key moment. Decision time. Somehow turn it around or head into sniper’s alley very vulnerable.

Everyone has an opinion. Right or wrong we judge others based on their appearance.

People looking at me were thinking he’s lazy, why doesn’t he care how he looks. You could see it in their faces and sometimes the barbed comments just came out. Funny I suppose but it wasn’t true. I cared a lot and was willing to do anything I could to change. Somehow I was trapped. It felt like the tide was coming in around me.

Early in the lockdown I had finished cutting the grass when all of a sudden something popped in my knee. The pain was excruciating. Hospitals were not an option at the time due to Covid so I decided the only thing I could do is completely rest my knee. Big mistake. Motion is Lotion and over the next couple of months I basically seized up. The pain in my knee was constant and by June I had piled on even more weight making it harder and harder every day to get around.

By August I was in with an orthopaedic surgeon in the Sports Clinic. ‘You need a new knee’. ‘Its when & not if’ he said. That hit me very hard. I suddenly felt very sad. The plan was to come back in 6 months and look at it again but first I had to lose a bit of weight. How am I going to do that when I cant even walk I thought.

‘Do you know any of those motivational lads’ the surgeon asked.

No, but did you see the girl in reception when you were coming in? That’s Paula and she lost a load of weight last year with some guy in Stillorgan. In the back of my mind, I’m thinking Stillorgan is too far away but said nothing. Out we go to Paula to see how she lost all her weight.

His name is Gerard Moran. They call him the Weight Whisperer. Its all online now due to Covid and he’s doing a Facebook live event tonight at 7. She found Bodyslims on my phone and said. He just gets inside your head. Its hard to explain but if you do what he says you will find yourself doing all the right things. He just gets into your head.

That night I tuned in to listen to this Weight whisperer with an open mind but it wasn’t going to take much in the way of bullshit to make me log out.

I was impressed. I listened to the whole thing. It made sense. It was only for 10 weeks and I could listen to this guy. I weighed myself the next day for the first time in a long time. Two things terrified me. Weighing scales and photographs. I needed to face down both before I start to recover.

I booked a place on the September 2020 course and I had just over 3 weeks to wait until it started.

About a week later I received an email from Bodyslims. It had a link to a new thing they were putting on the programme called ‘Positive Weight Whispers’. I started sticking it on at lunchtime and over a couple of weeks I noticed that I had less cravings. I also started bringing a healthy lunch with me. Something was stirring and now I couldn’t wait to start.

Gerard talks about challenges. They have to be overcome. Bodyslims started on a Wednesday. On the Tuesday I tested positive for Covid. Floored for a week the 10 weeks suddenly became 9 and I was playing catchup. Week 2. I walked 1km and had to rest before heading back. Try and do a little more every day I thought. I did but my knee was getting sorer every day until after about ten days I had to call my wife to come and collect me. Less than a mile into my walk and my knee was done. I was starting to lose weight, getting momentum and now what? I thought my head would burst with frustration. Then I remembered how Gerard had said that when his knee was really bad he would cycle. That was my new plan and a decision that allowed me to change my whole world.

Cycling did not hurt my knee in any way. I was now free to work for an hour every day like all the walkers were doing. The weight started to fall off. I embraced all the seminars and tried to do everything exactly the way he said. It really is the simplest way. By the end of the 1st programme, I had lost 5 stone even after missing the 1st week proper. I was delighted. People were asking me what was happening but I still needed my space to do it properly. My wife Janice was the only one that knew how much I had lost. She was under strict orders not to tell anyone. I really didn’t need a load of congratulations for losing 3 stone or 4 stone when I knew I needed to lose at least twice that. It could have derailed me so silence was maintained for now.

The 2nd programme was even better than the first. I maintained my weight loss over Christmas and I was straight back into it, losing 2 stone in 3 weeks. Now Tara was looking for a picture with a medal or a cup. I sent her one and now suddenly everyone knew I was doing Bodyslims. That was ok though. I was comfortable with that but still kept the amount I lost to myself. Programme 2, I lost 4 stone 9 pounds. Almost 10 stone. That changes everything.

There’s 3 weeks left on my third programme and I’m down nearly 12 stone from September 2020. 40% of my starting body weight. It turns out that I’m not lazy after all and I actually did care.

A man I have never met and never even spoke to has somehow totally turned my world around.

For that I will be eternally grateful. 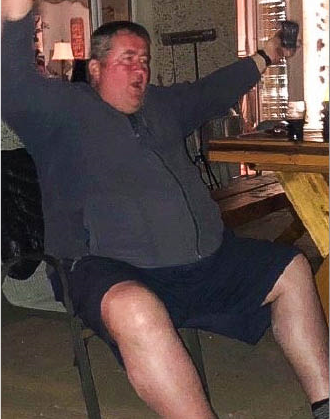 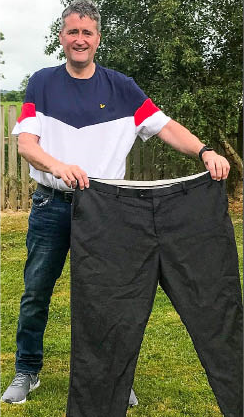